Switch to the dark mode that's kinder on your eyes at night time.

Switch to the light mode that's kinder on your eyes at day time.

Switch to the dark mode that's kinder on your eyes at night time.

Switch to the light mode that's kinder on your eyes at day time.


Tableau from different states at display during the full dress rehearsal for the Republic Day Parade in New Delhi on Thursday. (Express photo: Praveen Khanna)

Coming Sunday, India will celebrate its 71st Republic Day. The occasion marks the day when India’s Constitution came into effect, and the country became a republic.

Breaking decades-old tradition, the R-Day proceedings this year will not begin from India Gate, where the Prime Minister commemorates soldiers who have died in battle for India but instead will begin from the National War Memorial, where Prime Minister Modi will lay a wreath.

Following the wreath-laying ceremony, the Prime Minister will then head to Rajpath for the R-Day parade, which will begin at 10 am and last for 90 minutes. Top highlights of the Parade

🔴 At the Parade, the Indian Army will be represented by a Mounted Column of 61 Cavalry, eight Mechanised Columns, six Marching Contingents and a flypast by Rudra and Dhruv Advanced Light Helicopters of Army Aviation. Three Param Vir Chakra and four Ashok Chakra awardees will also participate in this year’s parade.

🔴 The R-Day parade will also include: 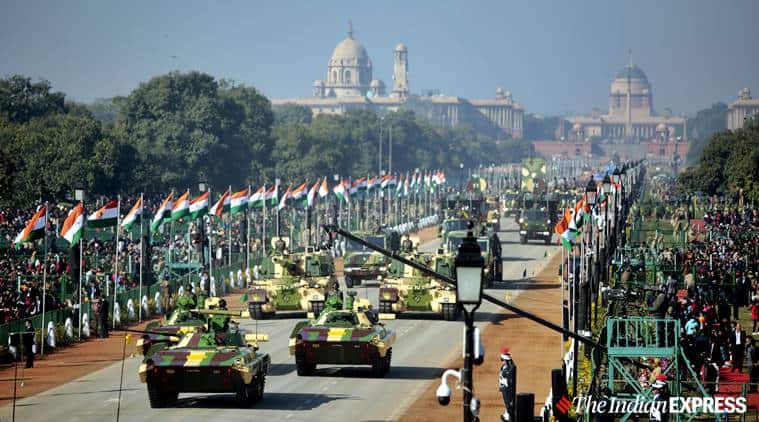 Army Tanks march past during the full-dress rehearsal for the upcoming R-Day parade, in New Delhi on Thursday. (Express photo: Praveen Khanna)

(e) A flypast by aircrafts of the Indian Air Force. A contingent of the Indian Army during the full dress rehearsal for the upcoming Indian Republic Day parade, in New Delhi on Thursday. (Express photo: Praveen Khanna)

🔴 Winners of the Pradhan Mantri Rashtriya Bal Puraskar will also participate in the parade in open jeeps. A total of 49 children have been awarded in different fields of Sports, Academics, Bravery, Innovations etc. This will be followed by cultural items by school children.

🔴 The motorcycle display this year will be performed by an all-woman team of the Central Reserve Police Force.

For all the latest India News, download Indian Express App

Get the best viral stories straight into your inbox!

What do you think?

Browse and manage your votes from your Member Profile Page

Browse and manage your reactions from your Member Profile Page

Sorry. No data so far.

Don’t miss out on new posts

© 2020 by bring the pixel. Remember to change this

Your password reset link appears to be invalid or expired.

To use social login you have to agree with the storage and handling of your data by this website. %privacy_policy%

Hey Friend! Before You Go…

Get the best viral stories straight into your inbox before everyone else!

Get the best viral stories straight into your inbox!